Explore & build on innovations with a global community. Participants share their submissions openly, and others may view and give feedback.

How might we harness technology to bring quality immunisation services to mobile urban populations, reduce outbreaks and improve primary healthcare?

Participants were welcome to submit solutions to the Beyond the Bag Challenge through one of three submission channels. Learn more about each channel.
Publicly Viewable
view pacesetters 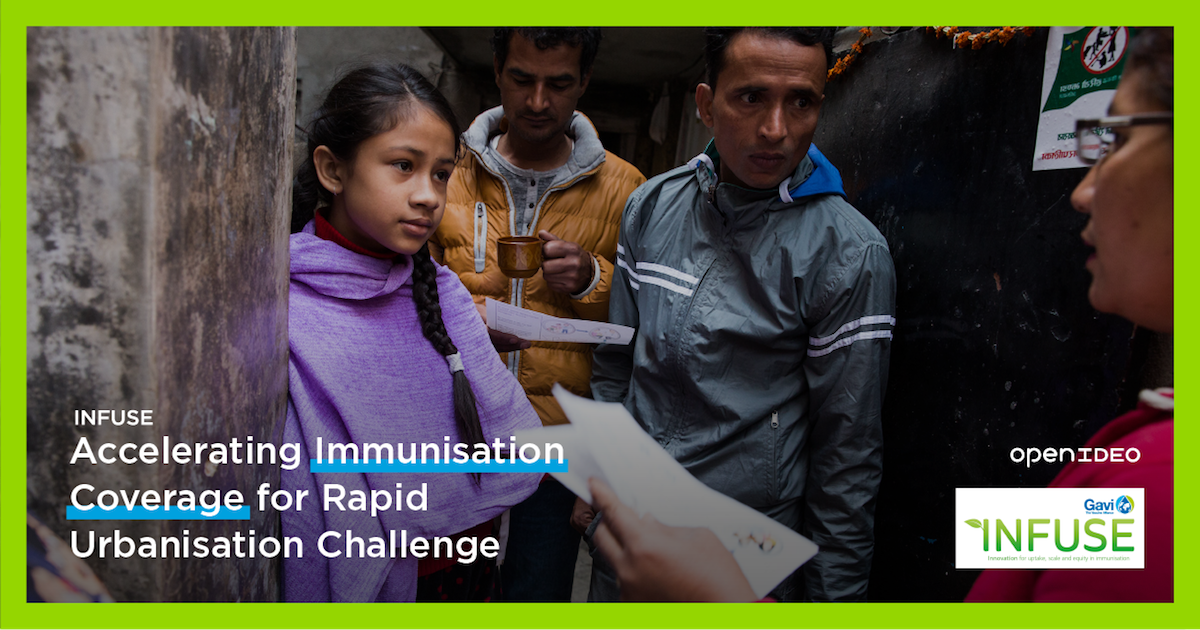 Immunisation connects the vast majority of families with the primary health system up to five times in the first year of a child’s life—more than any other health intervention. As a result, strengthening immunisation services in complex and dynamic urban settings also allows for a fortification of access to primary healthcare more broadly, and enables robust pathways towards achieving universal health coverage.

The Submission Phase is more than just a call for proposals.

At OpenIDEO, we believe that new and existing ideas become better through collaboration, transparent feedback, and iteration. Participants are encouraged to build off of others' concepts, collaboratively share insights, and refine their concept prior to final submission, by leveraging the shared resources and OpenIDEO Challenge team.

In the Submission Phase, we are calling on our global community to submit current innovations focused on the Challenge topic: harnessing technology to bring quality in immunisation services to mobile urban populations, reduce outbreaks and improve primary healthcare. Proposals will be accepted until 5:00 p.m. PST on Wednesday April 10/ 1:00 a.m. CET on Thursday April 11.

Submissions are reviewed by a panel of expert Judges, our Sponsors, and OpenIDEO to select Pacesetter Finalists.

Proposals on the platform will lock during this review period, though we encourage you to  leave and respond to comments, feedback or insights that may fuel idea development.

During our final evaluation period, shortlisted submissions will be reviewed by Gavi INFUSE, the rest of the Gavi secretariat and the OpenIDEO Challenge team. We will narrow down to a smaller list of proposals for deeper diligence, before announcing Pacesetter finalists in June 2019.

Announcing our Pacesetter finalists, who were invited to an in-person workshop to collaborate, pitch and receive expert feedback on their concepts.

Selected concepts have been announced and invited into the finalist Pacesetter community.

Pacesetter Finalists were announced in August 2019.

How might we harness technology to bring quality immunisation services to mobile urban populations, reduce outbreaks and improve primary healthcare?

Innovation for Uptake, Scale and Equity in Immunisation, or INFUSE, aims to identify proven solutions which, when brought to scale, have the greatest potential to modernize global health and immunisation delivery. INFUSE was launched by Gavi, the Vaccine Alliance, at the World Economic Forum’s 2016 Annual Meeting in Davos. Every year, INFUSE calls for innovations that can help Gavi, governments and partners to reach more children with life-saving vaccines. INFUSE then works with expert partners to select the most promising innovations and “infuse” them with the necessary capital, expertise or other support needed to bring them to scale. INFUSE aims to accelerate the speed at which developing countries can gain access to and scale up appropriate technologies to strengthen health systems.

In 2019, INFUSE is looking for innovations uniquely positioned to address immunisation challenges in urban settings. Ensuring that all children and families are reached by health services, tracking children through their course of vaccines, delivering high-quality immunisation services and improving disease surveillance are all vital to preventing and detecting outbreaks in densely-populated urban settings.

In 2018, 55% of the world’s population lived in urban settings. By 2050, this figure is expected to rise to almost 70%. This rapid growth will add nearly 2.5 billion people to urban areas, with 90% of the expansion occurring in Asia and Africa*.

These large, congested urban settings—with their often mobile, transient and underimmunised populations—are particularly at risk of disease transmission and outbreaks, such as yellow fever, cholera and typhoid. Inadequately built, densely-packed dwellings, unchecked informal developments, poor infrastructure and sanitary conditions, and frequent travel between urban and rural settings all have the potential to quickly transmit life-threatening diseases. This carries an additional economic cost to countries. According to World Bank estimates, the annual global cost of moderately severe to severe pandemics is roughly $570 billion, or 0.7% of global income.

Improving routine immunisation in the urban population is an essential component in addressing immunisation coverage and equity. Today nearly 6.4 million, or 40%, of the 16.1 million under-immunised children in the 73 Gavi-supported countries live in cities, and the proportion continues to increase. Gavi’s mission is to ensure that every child is immunised with basic life-saving vaccines no matter where they live. It is clear that the specific challenges in urban environments—which affect health workers, program managers and caretakers alike—require more innovation in order to ensure that every child is reached.

High mobility: Urban residents, particularly those living in informal settlements, are on the move. The high number of migrants in urban settings, including the almost 60% of refugees that live in urban areas across the globe, change residence and seek healthcare across different public and private facilities.

Insufficient services: Due to rapid or unrecognized growth in and around major metropolitan areas, services have not kept pace with the growing population. Immunisation services are not alone in this—water, sanitation and primary healthcare interventions are often absent from urban poor communities. Assuring that data on the population and their needs is made available is critical to designing programs and advocating for investments to improve access to primary healthcare and to pave the way for universal health coverage for other services.

The INFUSE Accelerating Immunisation Coverage for Rapidly Urbanisation Challenge aims to source technologies and tools to:

1) accurately identify and track under-immunised populations that are highly mobile and impermanent;

2) inclusively plan for services that are responsive and target underserved populations in urban settings; and

The progress of urban programs should be monitored through platforms that promote the use of data by program managers and communities (e.g. health worker tracking and caretaker quality of care reporting).

Submissions are welcome from registered nonprofit, civil society, community-based, and for-profit organizations working in any country and territory in the world. Participants must be serious about advancing their solution beyond the Challenge, and be beyond the piloting stage of their program/product/service. If your innovation is at the prototyping stage or earlier, please contact our Challenge management team about other opportunities for early stage funding at: infuseurbanimmunisation@ideo.com.

Although applications from any country are accepted, please note that Gavi currently focuses in and targets specific countries to strengthen urban immunisation programs. They are especially excited to see submissions from these countries and regions. An overview of Gavi’s urban immunisation related efforts, and their countries of focus, can be found here.

Technical experts and industry leaders will review submissions based on their proven ability to accelerate, improve, upgrade processes and service delivery across the immunisation value chain, accelerating coverage and equity in immunisation; the extent to which they have considered cost-effectiveness, potential time to scale, level of impact, evidence base, strength of business model and the team, and adaptability. Solutions that have originated in a developing country, have track records with respected public and private partners, can be replicated in at least French and English speaking countries, and are sensitive to issues of gender empowerment and environmental challenges are encouraged to apply.

INFUSE is not seeking early-stage innovations for research or pilot projects. To be successful, an innovation must have advanced beyond the pilot stage and be capable of being deployed at a large scale within six to twelve months.

For information about our submission criteria, please see below.

All submitted concepts should:

If you have questions around the submission process, or the Challenge in general, you can contact us at infuseurbanimmunisation@ideo.com for more information.

Unfortunately, we are only able to evaluate proposals in English and French. If submitting in either of these languages is not possible for your team, we ask you to submit earlier, and send a note at infuseurbanimmunisation@ideo.com for additional support. Although we cannot promise capacity to read and evaluate in other languages, we will do our best to provide the necessary support!

Through the INFUSE 2019 challenge selected innovations will be invited to join the INFUSE Community, an ecosystem of leading innovators, corporations, and development partners tasked with collaborating together to bring greater innovation to the immunisation and global health space. The most promising of these innovations will be designated as INFUSE Pacesetters and will receive focused support from Gavi and its partners with the potential of being taken to scale in interested Gavi supported-countries.

By applying to INFUSE, selected Pacesetters are entering a community of high-potential innovators and the opportunity to closely work with the Gavi Secretariat to accelerate and scale their innovations. With the INFUSE program the selected Pacesetters will benefit from the Gavi Alliance-wide network as well as its expertise in global health. INFUSE offers a unique opportunity to work with Gavi in securing the resources and expertise needed to scale.

We encourage you to use our toolkits and resources to improve and refine your submission prior to the final deadline.

Regardless of the stage of your innovation or organizational maturity, we believe that the design thinking framework can be used to improve important aspects of your work and proposed innovation.

Please review this list of Additional Resource links to help you get started.

About Gavi, The Vaccine Alliance

Gavi, the Vaccine Alliance is a public-private partnership committed to saving children's lives and protecting people's health by increasing equitable use of vaccines in lower-income countries. The Vaccine Alliance brings together developing country and donor governments, the World Health Organization, UNICEF, the World Bank, the vaccine industry, technical agencies, civil society, the Bill & Melinda Gates Foundation and other private sector partners. Gavi uses innovative finance mechanisms, including co-financing by recipient countries, to secure sustainable funding and adequate supply of quality vaccines. Since 2000, Gavi has contributed to the immunization of more than 700 million children and the prevention of over 10 million future deaths. Learn more at www.gavi.org and connect with us on Facebook and Twitter.

UNICEF: Innovating for Children in an Urban World

Community Fellows -Distributed Support from across the world

What to do After Submission

Sign up now to get key updates about OpenIDEO's Challenges and stories about social innovation delivered straight to your inbox.